“It’s been a pleasure working with Netpremacy”

Pressure Technologies is a specialist engineering group with businesses in Sheffield, Rotherham, Barton on Humber, Glasgow, Cardiff and overseas in Vancouver, Canada, Germany and Pittsburgh, USA.

The company was introduced to Pressure Technologies at a Sheffield Chamber of Commerce event where CEO, John Hayward was impressed by the presentation Netpremacy gave on the benefits to a business that G Suite could offer.

G Suite had two core appeals for Pressure Technologies, cybersecurity with trusted Cloud-based servers and the ability to collaborate. With geographically diverse businesses, Google’s G Suite and cloud storage gave Pressure Technologies added security and a common operating platform across the entire Group. The Cloud encouraged and enabled collaborative and mobile working, with access to data from any device, anywhere.

The project kicked off with Netpremacy being invited to present to Pressure Technologies senior management team and business leaders, who were as equally impressed as John had been at the event in Leeds.

To ensure a smooth transition of the overall G Suite Deployment, Netpremacy broke it down into 2 projects, so each project had its own statement of work.

The first project began in July 2017 and included all the manufacturing divisions. Given the scale of this first project, consisting of 6 businesses, a decision was made to break up the project into two phases: Drop 1 and Drop 2.

Project 1 was concluded by December, and the second project for the Alternative Energy Division was delivered early 2018. Even though this second project was smaller than the former it still came with its challenges. With Pressure Technologies being dispersed between the UK and Canada, it meant the project team had to plan meticulously to avoid issues arising from the time difference, time constraints and international training both in person and remote.

Each of the projects began with a period of discovery, an important aspect to ensure a smooth transition. The aim of this was to find out what processes could be improved upon, where time was being wasted and more importantly, where G Suite could be used to improve efficiency and the everyday practices of teams and individuals. The information collected was used to form the training sessions, training resources and post-training support that users received.

Training and communications were provided by Netpremacy as a part of managing the end user’s reaction to the change in the business. Moving platforms can often be stressful without the right communication to educate end users, leading to lower adoption levels if not managed correctly.

In this particular project, training played a very important role. Pressure Technologies encompassed most age groups and generations, as a result, there was a broad mix of confidence levels in using new tools. Taking this into consideration, Netpremacy took people from every sector of the business to be Google Guides, giving them access to G Suite before everyone else. This meant they were confident and in turn able to help their colleagues with the transition after the training and go-live had finished.

A programme of ongoing communications in the weeks following go-live ensured further support.  A “Tip of the Week” programme was created and sent out weekly to provide small pieces of information and improve knowledge on how to use different aspects of G Suite. This series of tips have been very successful so far with some users being known to print them out or store them in some way to create their own ‘Google Handbooks’.

“I have been heavily involved in IT projects during my 35 year career, and none of them have ever gone this smoothly. It’s been a pleasure working with Netpremacy. We highly rate the team for technical and project management ability. G Suite is transforming the way we work,encouraging much wider collaboration then we had dared to imagine.”

Although the migration to G Suite is complete, Pressure Technologies decided to continue with the CSS programme that Netpremacy provides. They felt this was essential to the continued success for the transition to Google and did not want to leave people with the project without ongoing support to ensure G suite is successfully embedded into the whole Group.

If you have any questions regarding G Suite and how it can enhance your company’s performance, please contact us.

Jellyfish are a global boutique agency located in offices in the UK, Europe,  US and South Africa. Jellyfish pride themselves on being accountable, autonomous, flexible and personal.

In 2017, Jellyfish approached Netpremacy as they wanted to achieve a more flexible and collaborative way of working. Over the course of several months, Netpremacy facilitated the transition to G Suite for all Jellyfish offices around the globe.

The project was kicked off with teams from Jellyfish and Netpremacy to outline the approach for the project. Initially, the Core IT staff at Jellyfish were the first team to go live.

The G Suite Ninjas were next. G Suite Ninjas were a select group of Google enthusiasts, tech-savvy individuals who would help support other end users through the transition. Jellyfish created a series of fantastic illustrations to accompany their Ninja theme, and brought fun and creativity to their go live!

“Jellyfish decided to Go Google in 2017 to further enable us to work in a more collaborative and secure environment. Netpremacy were incredibly helpful throughout the project, and ensured that our transition to Google was a smooth one”

For the final phase of the project, to make all other users live, Jellyfish and Netpremacy took a ‘big bang’ approach. This meant everyone went live on the same day. G Suite branded bottles, T-Shirts and stickers were handed out, along with bunting, balloons, and cake to decorate the offices during this time. This made Go Live week a more engaging and exciting event for everyone in the business. 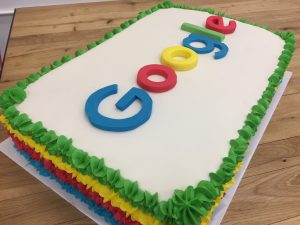 In addition to this, Netpremacy built a social intranet for Jellyfish to display content and create a central place for internal communications. This intranet was accessible for all staff members which integrates with G Suite where people’s emails, calendars, and files can be displayed for a more personalised feel. The intranet allowed for easier access to information, news, and files and formed an online social community for Jellyfish. This was also launched at the same time as users went live on Google making for a whole new exciting user experience!