How to reduce your carbon footprint with GCP

In recent years the topic of sustainability has begun to dominate headlines, social media and the world of business. Consumers are demanding change and businesses are now responding. At the most recent COP26 summit, it was announced that financial organisations of a certain size, from 2022, will have to declare how they are going to reduce their carbon emissions, a concept we expect to trickle down to other sectors and scale organisations. Many companies are committing to reduce their carbon footprint, from developing a circular lifestyle of products to running more energy-efficient office spaces.

But what are the top IT and business leaders doing to reduce emissions for a greener future? 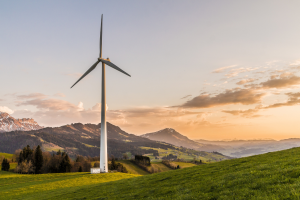 How could a cloud infrastructure reduce your company’s carbon footprint?

When people think about sustainability, cloud computing might not be the first thing that springs to mind. However, cloud infrastructure offers significant benefits on the topic of environmental impact. Essentially it all boils down to efficiency. Migrating to a cloud-based model opens up the opportunity to only use resources when you need them, this means less wasted energy when applications/resources are not in use. Then comes the advantage of scale. Cloud providers such as Google, run extremely efficient data centres designed with high tech heating & cooling systems, systems that would be near impossible to replicate for smaller on-premise infrastructures. These systems have been developed with sustainability in mind and are constantly evolving to progress even further, something many in-house teams would simply not have the capacity for. A study undertaken by Accenture in 2020 suggests that migrating IT functions to the public cloud could help reduce global carbon emissions by 59 million tonnes of co2 per year! To put that into perspective, that is the equivalent of taking 22 million cars off the road; a pretty impressive statistic!

So, why choose Google?

Whilst other cloud providers are at the early stages of their sustainability journey, Google embarked on their mission almost two decades ago, announcing they had achieved a carbon-neutral status in 2007. Just a decade later in 2017, they became the first company to match 100% of their electricity usage with renewable energy purchases. Google, however, knows this is not enough. Planning to lead by example, the company has pledged to run completely carbon-free, 24 hours a day, in all regions and data centres by 2030. This aside, Google’s mission does not stop at internal changes, they are committed to developing accessible tools that allow businesses and organisations to decarbonize their digital applications and infrastructures.

Cloud computing requires huge data centres that burn through energy, so there is no way it can be more sustainable than on-premise infrastructures right? Wrong! Even from the early days, Google built their data centres from the ground up, allowing them to control and develop new cooling technologies and operational strategies. Nowadays, Google’s renewable energy portfolio is one of the largest in the world. However, this is only the beginning, Google has recently adopted the concept of ‘carbon intelligent computing.’ This allows workloads to be dynamically moved to run in the most efficient data centre, at a time when the most carbon-free energy is available. Google’s commitment to efficiency within its own data centres alongside their tools for external cloud users has put GCP at the top spot as the greenest public cloud.

How could GCP help reduce your carbon footprint?

So we know what Google does and their plans for the future, but what does this mean for you and your carbon footprint? As mentioned, there are several ways in which Google is helping organisations reduce their carbon footprint through GCP, here are just a few to get you started.

1. Moving to the cloud

Let’s start from scratch! Moving from on-premise infrastructure to Google Cloud Platform already kick starts your journey to reducing your carbon footprint. As mentioned, by working within Google Cloud your cloud usage is already carbon neutral. So your first step is complete.

2. Use the Carbon Footprint tool

Late last year Google launched carbon footprint, a new tool that gives all GCP users the ability to see their gross carbon emissions associated with their Google Cloud platform usage. Integrated into cloud console, this tool enables users to measure, track and report on their emissions relating to the electricity usage of the cloud. Whilst net emissions will of course be zero on GCP, the cleanest energy is the energy you don’t use in the first place. With this in mind, having visual transparency into emissions allows companies to analyse their footprint by project, product or region to make improvements and changes going forward. And of course, for even deeper analysis you can export the data to BigQuery! 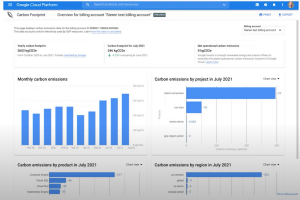 Back in 2020, Google published a CFE% (carbon-free emission) score for most of its regions, showing customers which areas were using the highest percentage of carbon-free energy so they could make an educated decision on where to run their applications from. In 2021, a pair of Googlers went one step further with the (open-sourced) release of ‘Google Cloud Region picker’; a tool that identifies the best Google Cloud region for an organisations applications based on carbon footprint, price and latency; empowering users to make informed decisions based on their business needs whilst considering the environmental impact. To make it even more accessible, Google added a ‘low CO2’ indicator to easily highlight regions with the lowest carbon impact inside cloud console location selectors. 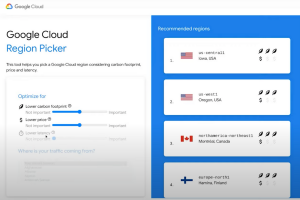 Google has a huge portfolio of serverless products, where infrastructure and scaling are all taken care of for you. Cloud Run is just one of those products designed to give you the flexibility and portability of containers without the headache of provisioning and managing the compute environment or clusters. But how does this impact sustainability? Aside from the obvious removal of provisioning machines, Cloud Run’s ability to auto-scale based on the number of incoming requests means if there are no requests, Cloud Run scales to zero and no resources are used! Another step to prevent unnecessary energy usage!

There you have it, just a few of the ways in which Google Cloud Platform can not only inform you of the carbon emissions but can help you make the next steps to minimising them. Unfortunately, climate change is no longer a distant threat. To find out more about how your business could benefit from cloud migration or take steps to reduce your emissions with GCP, don’t hesitate to contact one of our experts today.

Get in touch to learn more info@netpremacy.com.